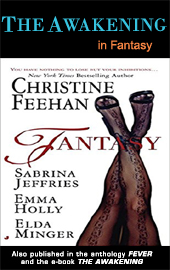 A beautiful naturalist's dream comes true—to live among the feral jungle creatures. But an untamed, irresistible beast of another sort inspires her to explore her own wild side. . .

THE AWAKENING
(in FANTASY) 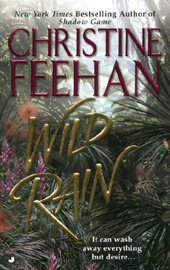 With a new identity, a staged death, and a chance to flee the treachery that stalks her, Rachael has escaped from a faceless assassin. 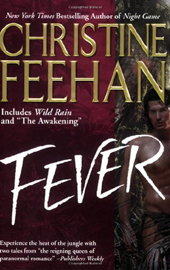 Fever brings the novella "The Awakening" and Wild Rain together for the first time in one volume. A perfect introduction to the Leopard Series. 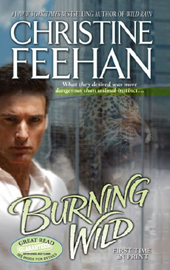 Born into a world of twisted monsters, Jake Bannaconni is shaped and molded into a cold, revenge driven man. 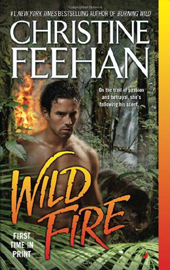 Called on a dangerous assignment, leopard shifter Conner Vega returns to the Panama rainforest of his homeland, looking every bit the civilized male. 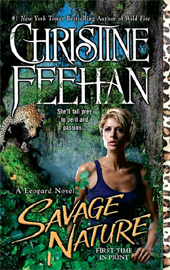 When Saria Boudreaux finds a dead body in the Louisiana bayou near her home, her first instinct is to go to the police. But there's a problem — it looks like... 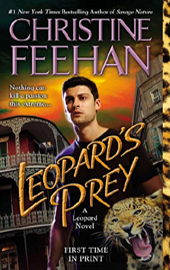 A serial killer is loose, snatching victims from the French Quarter with pitiless rage and unnatural efficiency. But something else is drawing Remy into the twilight... 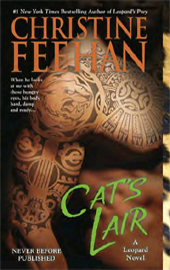 Cat Benoit has finally escaped the past — and the man who was the source of her nightmares. She's off the grid, underground but watchful, and creating a new... 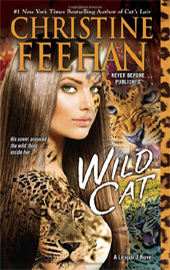 A simple request for Siena Arnotto: deliver a gift to her grandfather's friend. One look at Elijah Lospostos, hard-bodied and stripped to the waist, and Siena succumbs to a... 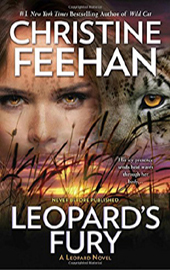 With her own bakery in San Antonio, Evangeline Tregre made a new life far from the brutal lair of shifters she was born into. Though she is all too aware of her leopard-shifter blood, she never felt... 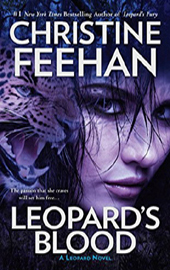 She is a woman who can create beauty out of the ruins of her own life. And it's her fierce spirit that's like a lure to Joshua, a temptation he can't resist—even if it means bringing his true nature into the light... 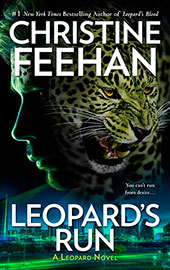 Ashe is on a mission, one that Timur Amurov realizes could put his family in danger. Now he must determine if he should kill her or claim her. Ashe is unique, seductive and dangerous but she knows she's met her match and it may cost her everything. 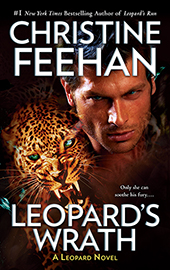 Considering her family's history, Ania Dover should know better than to get mixed up with a criminal like Mitya, but she just can't stay away. 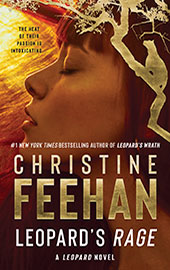 Leopard shifter Sevastyan Amurov has an anger inside of him that burns so hot it's almost impossible to control. His barely leashed rage relentlessly threatens to break free, until he meets a woman who soothes his restless soul. 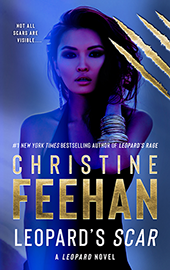 The moment Meiling sees Gedeon she knows he's a leopard shifter — just as she knows she can't trust him. Meiling doesn't take chances, life has taught her better than that. So why does she find herself rescuing this deadly, gorgeous man...

I'm so excited for LEOPARD'S SCAR to be released Nov. 29, 2022! I think people will be surprised about the hero and heroine. I know I was! I really love this couple! And the cover is so beautiful!

I'm excited to share that Wild Rain is now available in French and Burning Wild will be released in French on August 25th, 2021!

I am happy to share that I will be releasing a Leopard Series book in 2022 titles Leopard's Scar!

Thank you to all of my readers for making Leopard's Rage #1 on the New York Times bestseller list! I'm so excited!

Celebrating the release of Leopard's Rage with a blog over on Goodreads entitled Leopard Shifters and the Mob. I hope you stop by and check it out!

Leopard's Rage is out now! I hope everyone enjoys it!

I put up a blog on Goodreads entitled The Leopard Series: Leopard's Rage and hope you enjoy it! I talk about when I started writing the leopard series, the different types of leopards I've included and how it's evolved over time!

UPDATE! Leopard's Rage release schedule was changed. The book will be released Nov. 10th instead of the 3rd.

We just started working on the book trailer for Leopard's Rage and I'm so excited about it!

The cover for Leopard's Rage is so beautiful! I really love it! The gold is so pretty.

Happy to share that I have completed Leopard's Rage and turned it into my publisher!

The next Leopard book is Leopard's Rage and it will be released Nov. 3, 2020!

Thank you to everyone for helping Leopard's Wrath hit so many of the bestseller lists!

Leopard's Wrath is out! I've written two blogs to help celebrate the release. The first one is Writing Shapeshifter Stories and the second one is Leopard Shapeshifters and the Allure of the Alpha Male : Mitya. I hope you enjoy them!

You can watch the Leopard's Wrath book trailer HERE!

Chapter 1 of Leopard's Wrath and the Book Trailer are now up on my website!

I just saw the first draft of the Leopard's Wrath book trailer! I can't wait to be able to share it with my readers!

New blog on Goodreads - These Leopards Haven't Changed Their Spots: WalMart Covers. Find out about the new covers offered by WalMart!

The new Walmart exclusive, limited edition covers for the Leopard Series are fantastic! Cat's Lair was just released and you can pick it up at Walmart. You must go into the store to get this collector's edition. The story is the same, but the cover is new with a limited print run.

Leopard's Wrath will be released Nov. 5th! This is Mitya's book!

Lots going on with the Leopard series since WalMart decided to re-issue them with exclusive, limited-release variant covers! Wild Rain is already released with its new cover and next up is Burning Wild on April 16th and then Wild Fire on May 21! Leopard's Wrath is currently slated to release on November 5, 2019.

I finished Leopard's Wrath and turned it into the publisher! It's been a surprising book for me. I thought I knew exactly what I wanted to have happen but, the characters had other ideas. I love when a book surprises me. I love Mitya's story! The book is currently slotted to release Nov. 5th.

We've been working on the Leopard's Run book trailer all week. We hope to release the trailer to the Online Community within the next week or two!

Leopard's Run will be out November 6th and the main character is Timur! Our heroine, Ashe finds herself working with Evangeline in San Antonio.

I completed Leopard's Run and though it won't be out for several months I'm excited for its release. I loved and think Evangeline and Alonzo/Fyodor were an incredible couple, so I'm happy that we'll get to see them again! 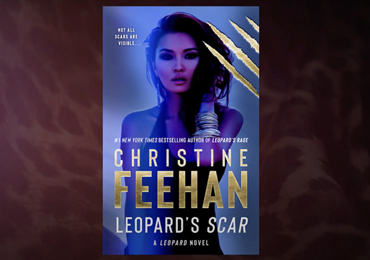 The moment Meiling sees Gedeon she knows he's a leopard shifter — just as she knows she can't trust him. Meiling doesn't take chances, life has taught her better than that. So why does she find herself rescuing this deadly, gorgeous man, when she knows she'd be better off leaving him to die? 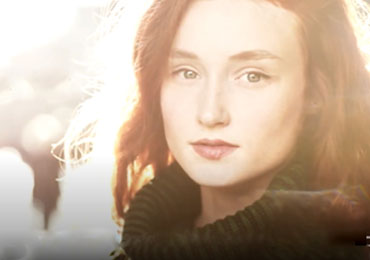 Leopard shifter Sevastyan Amurov has an anger inside of him that burns so hot it’s almost impossible to control. His barely leashed rage threatens to break free, until he meets a woman who soothes his restless soul. 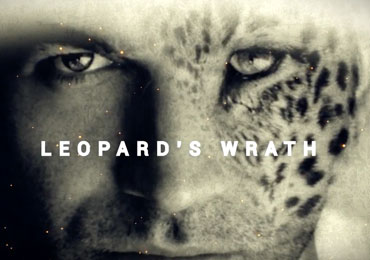 He's a man used to getting what he wants, but she's not the type of woman to take things lying down....

WATCH MORE book trailers and other videos about the Leopard Series.

Years ago I posted some of my research information on my website. When the website was updated the old research information was archived. I thought it might be fun to take a look at some of the archives for the leopard series as we get closer to the release date for Leopard's Scar. Not all of the p . . .

I wanted to update you on all the exciting things going on for me right now. First, I want to thank all of my readers for going out to purchase Leopard's Rage, it is #1 on the New York Times bestseller list! Avon has a new cover for Dark Guardian which is now available. I was so excit . . .